You are here: Building Insulation - Walls -Inside under plasterboard

Instructions and Guidelines
The galvanized metal studs can be installed directly to the wall in distances corresponding to the insulation panel or an independent metal stud portable frame may be build and used stand alone. In either case, verify that the walls are straight (for correct installation) and that the proper installation components used.

The permeability of vapor of the structure, may be determined based on the specific need, by the use of panels with facers permeable or impermeable to vapor.

When using panels with vapor impermeable facers, we suggest sealing the joints with adhesive aluminium tape in butyl rubber, in order to guarantee the continuity of the vapor barrier. 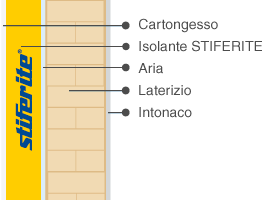 Note: For different composition of structures or material, we suggest using the calculation program available online (see: Thermal transmittance and verifications of condensation with Glaser method)